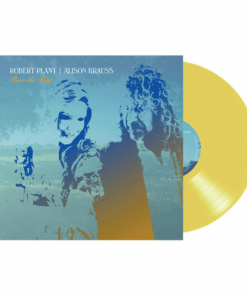 Reunited after some fourteen years, following the historic success of their first collaboration Raising Sand (2007), which reached #2 on the UK album chart, generated multi-platinum sales, and earned six Grammy Awards including Album and Record of the Year.

Like its predecessor, Raise The Roof was produced by T Bone Burnett, who worked with Plant and Krauss to expand their collaboration in thrilling new directions, accompanied by drummer Jay Bellerose, guitarists Marc Ribot, David Hidalgo, Bill Frisell, and Buddy Miller, bassists Dennis Crouch and Viktor Krauss, along with pedal steel guitarist Russ Pahl among others.

The album features twelve new recordings of songs by legends and unsung heroes including Merle Haggard, Allen Toussaint, The Everly Brothers, Anne Briggs, Geeshie Wiley, Bert Jansch and more. Other highlights include a Plant-Burnett original, “High and Lonesome,” and the Lucinda Williams classic “Can’t Let Go,” on which Williams herself contributes backing vocals.

This is the extremely limited edition on yellow vinyl. No guarantee we can deliver to every order.