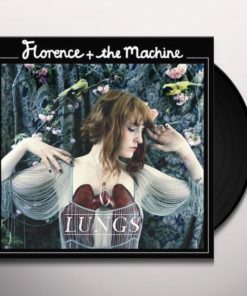 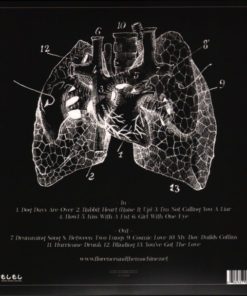 The album received generally positive reviews from music critics, with Welch drawing comparisons to the likes of Kate Bush and Fiona Apple. Lungs reached number one on the UK Albums Chart and number 14 on the US Billboard 200, selling over three million copies worldwide. The album was preceded by three singles: “Kiss with a Fist”, “Dog Days Are Over” and “Rabbit Heart (Raise It Up)”, with the latter reaching number 12 on the UK Singles Chart. Three further singles followed the release of the album, including “You’ve Got the Love”, the group’s first top-10 entry. To promote the album, Florence and the Machine embarked on the Lungs Tour between 2008 and 2011.

Prior to recording Lungs, Florence Welch had considered or attempted several different projects in the music industry, including an interest in becoming a country singer, recording folk songs she had written, and collaborating with Razorlight’s guitarist Johnny Borrell, but ultimately she was unsatisfied with those endeavors. Welch and Borrell wrote several songs together. In 2007, Welch fronted the hip hop-influenced group Ashok, recording an early version of “Kiss with a Fist”, titled “Happy Slap”, for their debut album, Plans.

It was not until Welch began writing and recording with childhood friend Isabella Summers at Antenna Studios in London that Welch crafted a sound she wanted to develop further. Distraught but also inspired from a recently failed relationship, Welch recorded with “enthusiasm over skills”, stating, “I’m quite glad I never learned to play the guitar, because I think I’d write songs that were more classically structured. As it is, I’ve had to create my own way of writing, which isn’t typical. Everything’s a big crescendo.” For a brief while, Welch and Summers performed as a duo called Florence Robot/Isa Machine in small London venues. Over the coming months, Robert Ackroyd (guitar, backing vocals), Chris Hayden (drums, percussion, backing vocals), Mark Saunders (bass guitar, backing vocals) and Tom Monger (harp) were recruited to form a band, renamed Florence and the Machine. In November 2008, Welch signed a deal with Island Records. Prior to recording the album, Welch spent a long time honing her sound while working with guitarists, intent on “[making] it into something that was a wave of sound that would envelop, something that was soaring, slightly church-like and then-doomlike.”

The band elected to record a shorter rendition of “Kiss with a Fist” as their debut single. Welch, however, began expanding upon the crude punk style which influenced “Kiss with a Fist” by listening to more contemporary music, particularly Arcade Fire’s debut album Funeral. The influence of the recordings would manifest itself on the concept she had devised for Lungs, which, according to Welch, was a “scrapbook of the past five years… it’s about guilt, fear, love, death, violence, nightmares, [and] dreams”. Ultimately, the majority of Welch’s earlier self-penned compositions were rejected for the album—except “Kiss with a Fist” and “Between Two Lungs”—because they did not mesh well with the album’s themes. Fortunately for the group, they rehearsed and improvised some of the material in the relaxed setting of Summers’ studio, allowing Welch to refine the tribal drumming backdropping Lungs’s tracks, most notably “Dog Days Are Over”.

Florence and the Machine recorded Lungs in the United Kingdom with five different producers—Paul Epworth, James Ford, Stephen Mackey, Eg White, and Charlie Hugall. Most of the songs on the album were mixed by Cenzo Townshend.